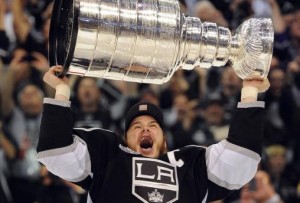 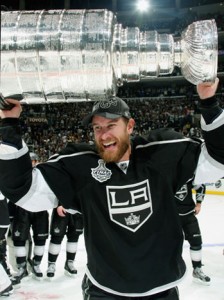 I really meant to post about the FINALS much earlier but I have so many other things happening and the series were flying by! So here we are I’m right here in L.A. (kinda, the Valley) and I’m here with them in another Finals games? It’s strange to me because I grew up in Pittsburgh during the 91-92 Championship Penguins and witnessed how the Hockey culture swept thru the city like never before! When I got there in late 86′ it was a city with championship hangovers from the 70’s Pirates and Steeler teams. The Penguins in the 90’s even had made into Rap lyrics (look it up yourself). In 1994 I spent my graduation in NYC & it started with me going to the Rangers Stanley Cup parade after 54 years of zilch! I remember how exciting it felt, there was ticker tape & people everywhere. I got caught up enjoying it too. Now I’ve been in Los Angeles since fall of 98′ and not long after I arrived it became a great Laker town again after a dead period. Since then it mostly has been a Laker town. People love the Dodgers too and now the Clippers have become legit (minus the Sterling mayhem) but hockey in L.A. was ONLY legit before because of a man named WAYNE GRETZKY (the website name) other than that it mostly was a novelty to most around here. This current squad is very special as a whole unit and if they happen to get the sweep just watch how large their fan base will grow beyond L.A.