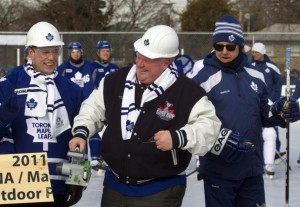 FILE – Toronto Mayor Rob Ford, center, smiles as he officially opens the refurbished Sunnydale rink with Toronto Maple Leafs’ coach Ron Wilson, right, and other dignitaries who were on hand as well as the Toronto Maple Leafs NHL hockey team, who practiced on the outdoor rink in Toronto in this Wednesday, Jan. 4, 2012 file photo. Ford, who became a global sensation in 2013 after admitting he’d smoked crack cocaine, has been appointed to the Hockey Hall of Fame and Museum’s board of directors, the hall announced Saturday April 4, 2015. (AP Photo/The Canadian Press, Pawel Dwulit, File)

Former Toronto Mayor Rob Ford died at 46 on Tuesday, after an 18-month battle against an aggressive form of cancer.

Any attempt to eulogize Ford is ultimately futile. An honest recollection of his scandal-riddled time as a public servant, and international punchline, comes off as too caustic. Lionizing or humanizing him would ignore the reasons why neither was attempted during his all-too-short life.

When the same sites that ran “40 of the funniest cracks about Toronto mayor Rob Ford” roughly two years ago are now collecting “the most heartfelt condolences about Rob Ford,” it’s enough to make your head spin. We imagine most of Toronto is coming to terms with this contradiction today as well.

Ford had a long-standing relationship with hockey, as any Toronto politician would. A few of those connections, as we remember a memorable mayor. SEE MORE